(As previously seen on Writer With a Passport.)

There’s something magical about noise when I’m traveling. Not everyone enjoys noise, especially during the wee hours of the night. But I love it. The Spanish sometimes remind me of New Yorkers–especially here in Alicante. It feels like the city that never sleeps. 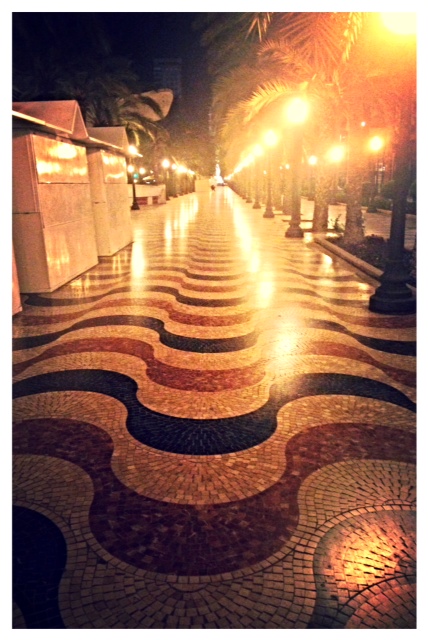 The Esplanada in Alicante at night.

When the summer is here, as I’ve witnessed firsthand six years ago, the nightlife will be even more alive. Right now, especially during the weekday, it’s not as busy. And yet, it seems that there’s always something going on.

It’s 9am and I have my coffee and an apple for breakfast. My window is wide open and I can hear all the noise of the morning bustle. True, many places do not open until later, but there are many businesses that operate earlier than 10am. Buses are flying by on the street, and I can hear people talking on the sidewalk.

Later in the day, there will be another burst of noise as people gather at the sidewalk cafes for lunch and “siesta.” Tonight, there will be lots of people going out for tapas, drinks, and dancing–especially because it’s Friday–el fin de semana: Fiesta time! When they come home in the early morning, I’ll probably hear them chatting excitedly to one another, regaling the new memories just made–and they’ll probably be borrachos. But even before that, around 1 or 2 in the morning, the garbage truck and street cleaners will be in my neighborhood, making more noise. 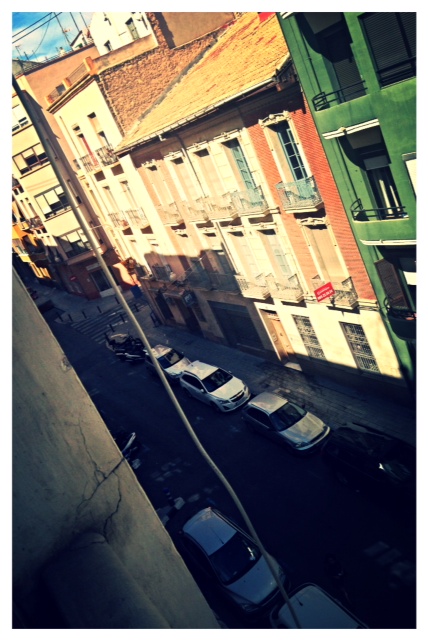 The view of the street from my apartment window.

So why do I like all this noise? Because it represents life. Life and humanity. When you travel alone, even if you don’t have a direct connection to another person, there is always life around you (unless you’re a complete hermit, of course). It’s in the noise of the city, it’s in being confined in small spaces like a tram or metro and remembering that most other cultures don’t have a personal bubble when it comes to the daily commute, and it’s in watching people interact. I’ve always been an avid people-watcher, and now, as a writer who travels, being in another country is like being a scientist who has just been granted access to one of the best experimental labs in the world.

There is magic all around me, but it’s especially in the noise. It’s there when I’m trying to sleep at 2am and I hear someone’s conversation four stories down, almost amplified by the old window in my room. Finding that magic while traveling, I think, is important. It’s what helps me keep an open mind, pushing me to try new things, when I have fear or feel intimidated by language barriers.

The next time YOU find yourself traveling, no matter where it is, stop and find the magic in the noise. Look at life all around you and take time to appreciate what a miracle it is to be alive. Maybe it’ll help you sleep better; maybe it won’t. But, I bet you’ll look at things with a new appreciation, and isn’t that what travel is all about?

I’ve made a pretty big decision over the past several months, and I’m finally ready to share it with everyone:

I’m moving abroad this summer in order to see if I have what it takes to be an expat and travel writer!

Saying “this summer” sounds a little noncommittal, but I DO know that when I come back to my hometown for a short visit in August, I do not intend to stay. Perhaps I will be headed back to Spain, which is where I’ll be most of the summer, or perhaps I’ll be headed for somewhere else. It really doesn’t matter right now, however; what matters most to me is that I am giving myself the freedom to have an open mind and heart as I get ready to go on a new adventure. 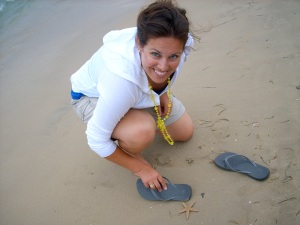 Making friends with a starfish in Alicante, Spain in 2008.

I’m going on an adventure because I want to, because I need to get out of my comfort zone, and because I CAN. That’s my reasoning and I think that as I have time to myself and time to breathe, I’ll figure out more reasons why along the way. And as I discover new things about myself while journeying to places I’ve never been, I will be sharing my thoughts and insights here on the blog, as well as my new (and soon-to-be-launched) travel blog: writerwithapassport.com.

The new website isn’t quite ready yet, but I’ll be sure to announce its “grand opening” sometime next week. My first stop and summer home will be in Alicante, Spain, and then we’ll see where I go from there!

Anyways, I thought I’d write more, but that’s all I care to share on the subject for now. I leave in exactly a week and am definitely ready for a change of scenery and pace. Stay tuned for more! 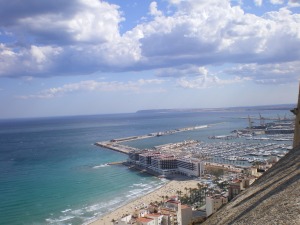 Beautiful view of the Alicante coast from the Castillo de Santa Barbara.